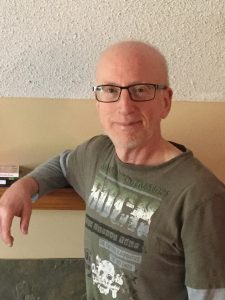 The Worcester County Poetry Association (WCPA) is pleased to announce that Dean Gessie of Midland, Ontario, Canada, has won this year’s WCPA Poetry Contest: The Frank O’Hara Prize. His poem “Diary of a Dead Eel Boy” was selected by contest judge Pam Bernard from the 191 poems submitted by 69 entrants.

Dean Gessie is a widely acclaimed author and poet who has won or placed in more than 80 international competitions. Gessie won the Enizagam International Poetry Contest in California and he was selected for inclusion by Black Mountain Press in both The Sixty-Four Best Poets of 2018 and 2019. In England, Gessie was shortlisted for the Anthology Poetry Award and the Latin Program Poetry Prize, and in Ireland, for the Fish International Poetry Contest. He was a finalist for the Seán Ó Faoláin Short Story Prize. He also won Third Prize in the Hungry Hill Writing Poets Meet Politics Competition. His short stories and poetry have appeared in numerous anthologies around the world. He has also published three novellas with Anaphora Literary Press: Guantanamo Redux; A Brief History of Summer Employment; and TrumpeterVille.

The winning poems will be published in the next edition of The Worcester Review, the nationally recognized journal of the WCPA. The winners also receive a cash award. The WCPA will invite all the winners to read their work at the Winners’ Ceremony and Reading on Sunday, September 26, 2021, at 3:00 p.m.  The Winners’ Reading will be held at the First Unitarian Church, 90 Main Street, Worcester.  We hope that contest judge Pam Bernard will also be able to join us.

Contest judge Pam Bernard is a poet, painter, editor, and adjunct professor who received her MFA in Creative Writing from the Graduate Program for Writers at Warren Wilson College and BA from Harvard University.  Her awards include a National Endowment for the Arts Fellowship in Poetry, two Massachusetts Cultural Council Fellowships, and the Grolier and the Pablo Neruda Prizes in Poetry.  She has published four books: three full-length collections of poetry, and most recently a verse novel entitled Esther, published by CavanKerry Press.  Ms. Bernard lives in Walpole, New Hampshire.

The contest, which was established in 1973, was renamed the Frank O’Hara Prize in 2009 and continues to be generously supported as a tribute to the late poet Frank O’Hara by the O’Hara family.