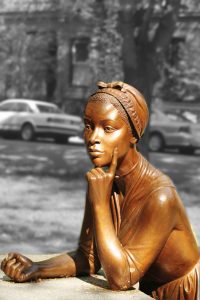 Despite spending much of her life enslaved, Phillis Wheatley is recorded as the first African American to publish a book of poems. Wheatley, (1753-1784) a Senegalese child kidnapped and sold into slavery when she was seven or eight years old, published “Poems on Various Subjects, Religious and Moral” in London in 1773. Her work brims with gratitude, faith, and hope. She wrote a great many funeral pieces, requested by friends and patrons. Many poems allude to Greek and Roman myths, are based on religious teachings of the period, and refer to nature and the wonders it personifies.

Hymn to the Evening (excerpt)

Soon as the sun forsook the eastern main,
The pealing thunder shook the heavenly plain;
Majestic grandeur! From the zephyr’s wing,
Exhales the incense of the blooming spring.
Soft purl the streams, the birds renew their notes,
And through the air their mingled music floats. (Wheatley 38)

In 2020 the American Antiquarian Society hosted a program with poet, writer, and essayist Honorée Fanonne Jeffers about her newest book of poetry, The Age of Phillis. It delves into the pre-slavery life of the African child renamed Phillis. A recording can be found at https://www.americanantiquarian.org/public-program-honor%C3%A9e-fanonne-jeffers-0.