Lucille Clifton (1936 – 2010) was a prolific poet and children’s book author. Clifton’s work was easily identified by its purposeful lack of punctuation and capitalization. She served as Maryland’s poet laureate from 1974 until 1985 and won the National Book Award for her collection “Blessing the Boats.”

Her poetry ranged from social upheavals and the African-American urban experience to her role as a woman and poet.

On the anniversary of her death, we share her poem, 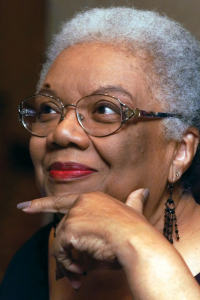 when she woke up
she was terrible.
under his mouth her mouth
turned red and warm
then almost crimson as the coals
smothered and forgotten
in the grate.
she had been gone so long.
there was much to unlearn.
she opened her eyes.
he was the first thing she saw
and she blamed him.”
— lucille clifton, “sleeping beauty”