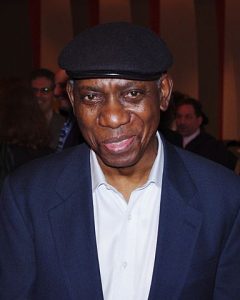 Susan Conley writing in Ploughshares shares “Yusef Komunyakaa speaks in a gravelly Southern baritone, tinged with a Cajun flavor that reflects his childhood years in Louisiana. He is a man who chooses his words carefully, splicing his speech with long silences, until his conversation resembles something close to a jazz riff — very fitting for this acclaimed poet who says “oral language is our first music, and the body is an amplifier.”

We were honored to include Yusef’s poem “Gingkoes” in the 2012 issue of The Worcester Review which honored Chris Gilbert.  You can read Gingkoes at theworcesterreview.org.

Photo by David Shankbone. Komunyakaa at the 2011 National Book Critics Circle Awards in March 2012; his book The Chameleon Couch was nominated for the poetry award.