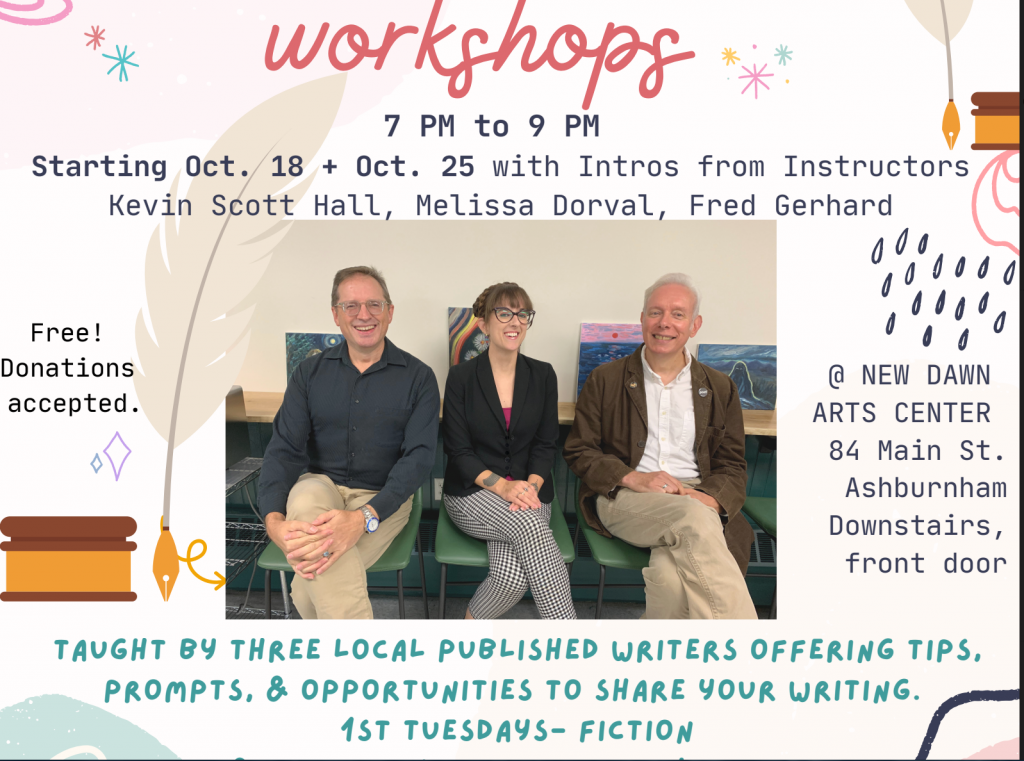 October 18 th and 25 th will feature all three instructors introducing themselves and offering prompts and helpful writing tips. Beginning in November, the first Tuesday will focus on fiction (Dorval), the second Tuesday, non-fiction/memoir (Hall), and the third Tuesday, poetry (Gerhard). The fourth Tuesday will be an “open mic” where all writers can come together and share what they’ve written.

Fred Gerhard is a poet whose work has appeared in a multitude of literary journals, including Entropy Magazine, Heavy Feather Review, and Pif Magazine. His poetry has also been voiced by actor Kirk Lawrence in Bespoke Vocals, as seen on YouTube. Gerhard led a poetry therapy group at Community Healthlink in Worcester. He was the editor of The Chelmsford Poetry Review and is currently an editor of Quabbin Quills Press anthologies.

Kevin Scott Hall is the author of the highly regarded memoir A Quarter Inch From My Heart (Wisdom Moon) and the self-published novel Off the Charts!. He is also a singer/songwriter and recording artist; his music can be heard on streaming platforms, including YouTube, where he also has a few music videos. Hall taught theater, writing, and literature for 17 years at two City University of New York campuses. He holds an M.F.A. in Creative Writing from The City College of New York.

All three have deep local roots: Dorval grew up in Gardner and currently lives in Leominster; Gerhard lives in Ashburnham with his wife and son and his work was recently featured at Creative Connections in town; Hall attended Oakmont Regional High School and relocated to Ashburnham in late 2020 after spending over three decades in New York City.