This year’s final poetry/spoken word event by Poets at Large and hosted by Valley Cast/Open Skies will be on Sunday, October 23rd from 2-4 p.m. in the theater at the Singh Performance Center, 60 Douglas Road, Whitinsville, MA. This is the last in this year’s series of free readings and is recommended for ages 14 and up. There will be an open mic segment after intermission and light refreshments will be served.

Performing will be poets Brad Davis, Elizabeth Thomas and Rebecca Olander. Featured open mic reader will be Susan Powers. Davis, a resident of Putnam, CT., and his book Trespassing on the Mount of Olives was released in 2021. He runs a reading series at the new Putnam Public Library with four events each year. Davis has published pieces in a variety of journals, including Poetry, Paris Review, Image, LETTERS, and Michigan Quarterly, and some of his works have won awards including the AWP Intro Journal Award and the Sunken Garden Poetry Prize . He is the author of several collections of poems including Though War Break Out, Song of the Drunkards, and Still Working It Out. 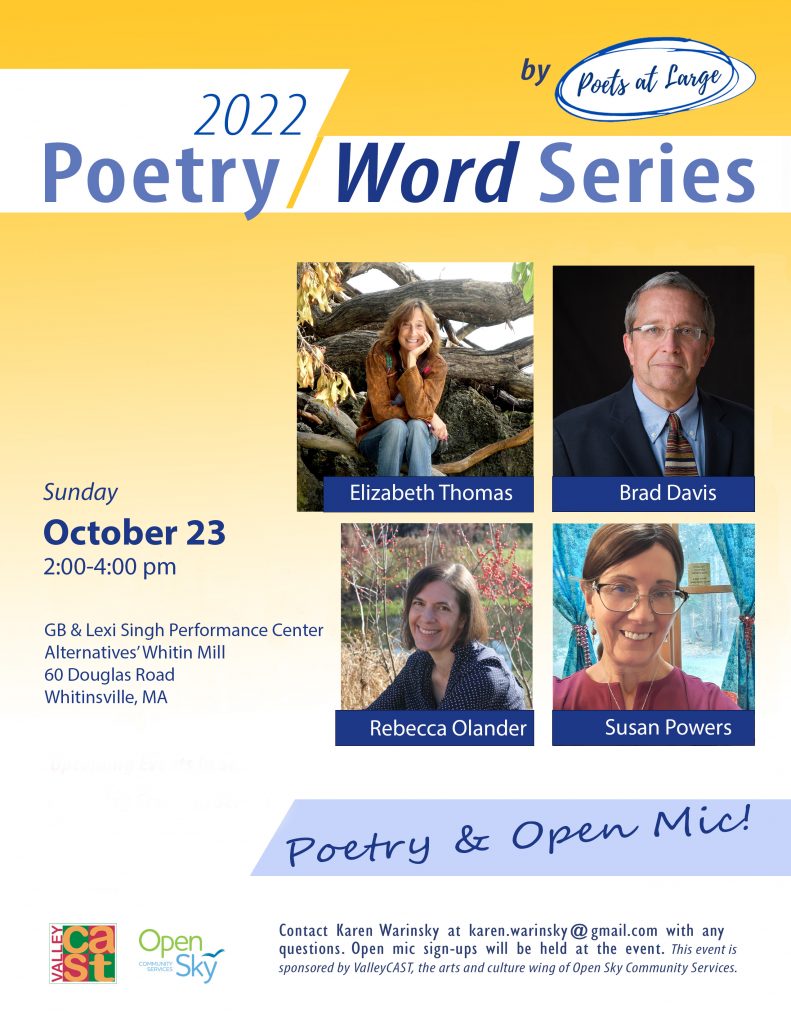 Elizabeth Thomas is an arts educator from Columbia, CT who has taught all ages from pre-K to senior citizens. She has taught in most of the Hartford schools, and is a master teaching artist for the Connecticut Commission of the Arts and the Bushnell Center for the Performing Arts. She is the author of two poetry books: Full Circle and From the Front of the Classroom. She has shared poetry all over the United States and in other parts of the world. Her work centers on teaching, family, politics and environmental concerns. She currently is the recreation coordinator for a local senior center where, she says, she “gets to play for work.”

Rebecca Olander is a poet, teacher and editor based in Western Mass. She is the editor/director of Perugia Press. Olander has been winning poetry awards since 2009 and her most recent accomplishments include the Straw Dogs Writers Guild Writing Residency in 2019, a Pushcart Prize nomination also in 2019, being named a finalist in the Two Sylvias Press Chapbook Prize contest, and her poem “Distanced” won the Mass Poetry Ekphrastic Gallery Contest. Previously, she won first place in the Woman’s National Book Association Poetry Award in 2013 for her poem “Late October Light.”

Susan Powers lives in Woodstock, CT and is a retired English teacher. She is a published poet with works that include a chapbook, Break the Spell, and her poems have appeared in a few online venues, primarily in The Sixfold Magazine.