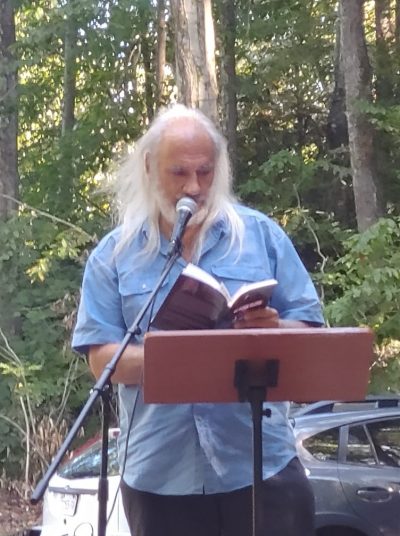 Massachusetts poet and former National Beat Poet Laureate (2019-2020) Paul Richmond, will be among the readers at the next Poet’s at Large spoken word/poetry event at Roseland Park, Woodstock, CT. This will be held on September 11th from 2-4 p.m. at 205 Roseland Park Road, Woodstock, Ct. in the barn.
Recommended for ages 14 and up. Richmond hosts monthly readings and organizes yearly Word Festivals, including, The Turner Falls Annual Word Festival, and he has a stage at the Garlic & Arts Festival each fall. He has published several books including Living in the Breakdown Lane, You Might Need a Bigger  Hammer, and Quadrillions Down the Pentagon Drain. His newest work is Swimming on the Titanic. He is also a member of the Funkadelic band “Do It Now.”
Reading along with Richmond will be Connecticut’s most recent poet laureate, Margaret Gibson, (2019-2022), former finalist in the Montreal International Poetry Contest, Karen Warinsky, and Pomfret co-Poet Laureate Nancy Weiss. Open mic will be held after intermission and sign-ups are at the event. Poets will be held to a 5-minute limit.
Gibson has a wealth of awards and writing credits. She has authored 13 books of poems, all from LSU Press, most recently The Glass Globe, 2021.? She has published her poems widely in journals such as Georgia Review, Gettysburg Review, Southern Review, and Image Journal. Her most recent awards include being named a Finalist for the 2016 Poets’ Prize for her book Broken Cup, and the title poem from that book won a Pushcart Prize. Her poem “Passage,” was included in The Best American Poetry in 2017, and previously she received the Melville Kane Award, the Connecticut Book Award, and she was a Finalist for the National Book Award in Poetry in 1993 for her book The Vigil. Ms. Gibson is Professor Emerita at the University of Connecticut.
Warinsky, the coordinator of Poets at Large, has published poetry since 2011. Her work appears in several anthologies including the 2017 release, Nuclear Impact: Broken Atoms in Our Hands, the 2019 Mizmor Anthology, Honoring Nature, released in 2020, as well as pieces in lit magazines including Blue Heron, Circumference, and most recently, Consilience, published in the U.K., an effort that combines science and poetry. Her debut collection Gold in Autumn was released in 2020 and her new book is titled Sunrise Ruby, both from Human Error Publishing.
Weiss is serving as the first co-Poet Laureate for Pomfret. ?For more than 15 years she has
written a weekly column for the Villager newspapers. ? She wrote for the Putnam Traveler, Edible Nutmeg and Naturally at UConn for many years as well.
This year’s free word/poetry series is being held in conjunction with readings at the G.B. & Lexi Singh Performance Center, 60 Douglas Road, Whitinsville, MA. There will be one remaining reading in the series from 2-4 p.m. on October 23 at the Singh Center. Sponsors of the Roseland Park readings include Charter Oak Federal Credit Union, Linemaster Switch, Atty Mark Brouillard, Ashford Xtra Mart, CR Premier Properties, WHZ Strategic Wealth Advisors, Bank Hometown & EA Custom Millwork of Northbridge, MA. Sponsors of the Singh Center events include Webster First Bank, EA Custom Millwork and ValleyCast/Open Sky Community
Services. Email karen.warinsky@gmail.com with questions.