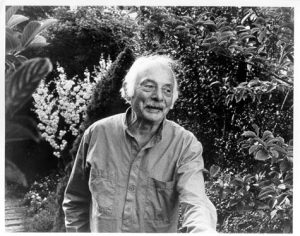 Stanley Kunitz in his Provincetown garden. Photo by James Laughlin

On my way home from school
up tribal Providence Hill
past the Academy ballpark
where I could never hope to play
I scuffed in the drainage ditch
among the sodden seethe of leaves
hunting for perfect stones
rolled out of glacial time
into my pitcher’s hand;
then sprinted lickety-
split on my magic Keds
from a crouching start,
scarcely touching the ground
with my flying skin
as I poured it on
for the prize of the mastery
over that stretch of road,
with no one no where to deny
when I flung myself down
that on the given course
I was the world’s fastest human.

Around the bend
that tried to loop me home
dawdling came natural
across a nettled field
riddled with rabbit-life
where the bees sank sugar-wells
in the trunks of the maples
and a stringy old lilac
more than two stories tall
blazing with mildew
remembered a door in the
long teeth of the woods.
All of it happened slow:
brushing the stickseed off,
wading through jewelweed
strangled by angel’s hair,
spotting the print of the deer
and the red fox’s scats.
Once I owned the key
to an umbrageous trail
thickened with mosses
where flickering presences
gave me right of passage
as I followed in the steps
of straight-backed Massassoit
soundlessly heel-and-toe
practicing my Indian walk.

Past the abandoned quarry
where the pale sun bobbed
in the sump of the granite,
past copperhead ledge,
where the ferns gave foothold,
I walked, deliberate,
on to the clearing,
with the stones in my pocket
changing to oracles
and my coiled ear tuned
to the slightest leaf-stir.
I had kept my appointment.
There I stood int he shadow,
at fifty measured paces,
of the inexhaustible oak,
tyrant and target,
Jehovah of acorns,
watchtower of the thunders,
that locked King Philip’s War
in its annulated core
under the cut of my name.
Father wherever you are
I have only three throws
bless my good right arm.
In the haze of afternoon,
while the air flowed saffron,
I played my game for keeps—
for love, for poetry,
and for eternal life—
after the trials of summer.

In the recurring dream
my mother stands
in her bridal gown
under the burning lilac,
with Bernard Shaw and Bertie
Russell kissing her hands;
the house behind her is in ruins;
she is wearing an owl’s face
and makes barking noises.
Her minatory finger points.
I pass through the cardboard doorway
askew in the field
and peer down a well
where an albino walrus huffs.
He has the gentlest eyes.
If the dirt keeps sifting in,
staining the water yellow,
why should I be blamed?
Never try to explain.
That single Model A
sputtering up the grade
unfurled a highway behind
where the tanks maneuver,
revolving their turrets.
In a murderous time
the heart breaks and breaks
and lives by breaking.
It is necessary to go
through dark and deeper dark
and not to turn.
I am looking for the trail.
Where is my testing-tree?
Give me back my stones!

Stanley Kunitz (1905-2006), twice named Poet Laureate of The United States, was born in Worcester in 1905 and has become one of the most celebrated poets in the United States.  He once said, “Worcester provoked me into poetry.”  Regardless, we can savor the brilliant work those provocations created.   His childhood home is a poetry mecca for poetry lovers over the world.

He has been featured numerous times in The Worcester Review and the WCPA has honored him first as one of the initial poets invited to read at its founding in 1971 and with many celebrations since.

Learn more about Stanley Kunitz by visiting the following sites: