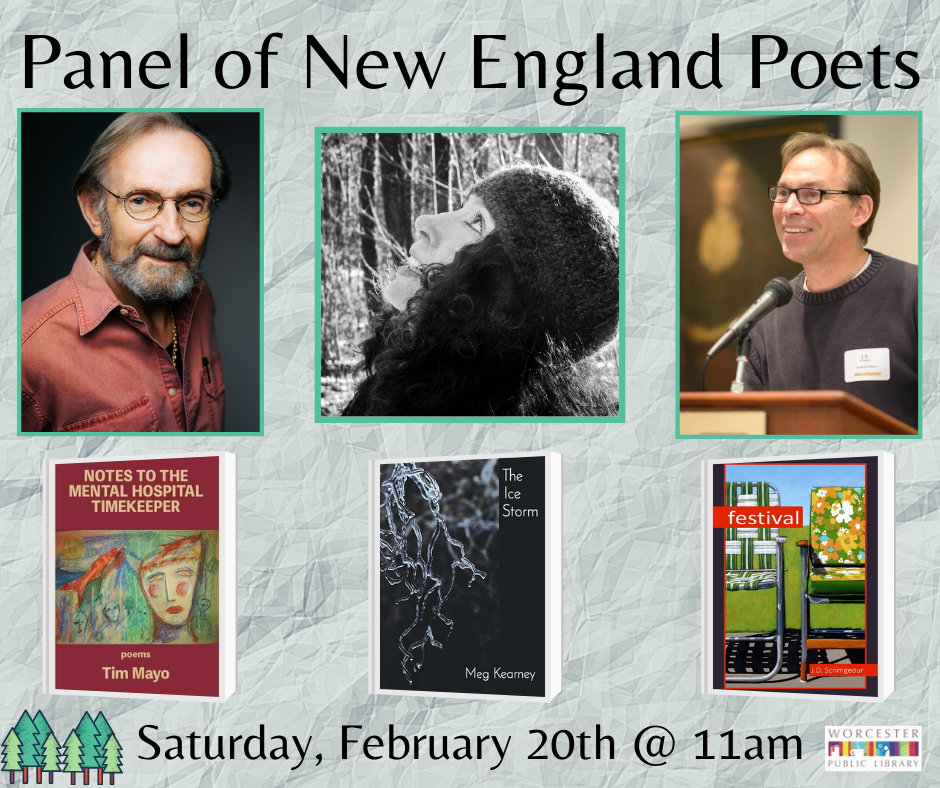 The Worcester Public Library is pleased to present a panel of poets who are in New England. Panelists Meg Kearney of New Hampshire, Tim Mayo of Vermont, and J.D. Scrimgeour of Massachusetts will read aloud some of their work, discuss what drew them to writing poetry, the struggles they’ve faced, and advice for aspiring poets.

In June 2021, The Word Works Press will publish Meg Kearney’s All Morning the Crows, winner of the 2020 Washington Prize for poetry. Meg is also the author of An Unkindness of Ravens and Home By Now, winner of the PEN New England L.L. Winship Award; a heroic crown, The Ice Storm, published as a chapbook in 2020; and three verse novels for teens. Her award-winning picture book, Trouper, is illustrated by E.B. Lewis. Meg’s poetry has been featured on Garrison Keillor’s “A Writer’s Almanac” and Ted Kooser’s “American Life in Poetry” series and included in the 2017 Best American Poetry anthology (Natasha Tretheway, guest editor). She lives in New Hampshire and directs the Solstice MFA in Creative Writing Program in Massachusetts. Visit www.megkearney.com.

Tim Mayo has published two full-length collections of poetry, The Kingdom of Possibilities (Mayapple Press, 2008), a finalist for the May Swenson Award and Thesaurus of Separation (Phoenicia Publishing, 2016), which among other awards was a finalist for both the 2017 Montaigne Medal and the 2017 Eric Hoffer Book Award. His two chapbooks are The Loneliness of Dogs (Pudding House Publications, 2007) and Notes to the Mental Hospital Timekeeper (Kelsay Books, 2019), which won Honorable Mention in the chapbook category of the 2020 Eric Hoffer Book Awards. Nominated for seven Pushcart Prizes, his poems and reviews have appeared in numerous literary magazines, including The American Journal of Poetry, Barrow Street, Narrative Magazine, ONE (Jacar Press), Poetry International, Valparaiso Poetry Review, Verse Daily, and The Writer’s Almanac. He lives in Brattleboro, Vermont, where he was a founding member of the Brattleboro Literary Festival, and where he continues to teach and work in a mental hospital. Visit www.tim-mayo.net.

J.D. Scrimgeour is the author of four poetry collections The Last Miles, Territories, Lifting the Turtle, and, most recently, Festival. He won the AWP Award for Nonfiction for his second nonfiction book, Themes for English B: A Professor’s Education In & Out of Class. With musician Philip Swanson he released Ogunquit & Other Works, a CD blending music and poetry. A longtime resident of Salem, he’s written in many genres about the city. Mary Towne Eastey, an ancestor in his direct line, was put to death during the Salem Witch Trials. Another ancestor, Thomas Perkins, sat on the jury that found her guilty.