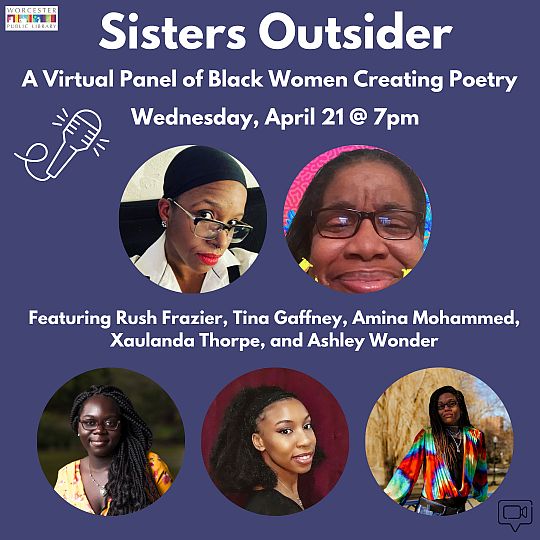 Miss Tina E. Gaffney is the Artistic Director of Stage Presence Productions; is the Host, Writer, and Producer of the Radio Show “The African American Experience” (which was recognized in O Magazine) and is the FIRST and ONLY Woman of Color to portray Esmerelda Scrooge in Charles Dickens’ A Christmas Carol (produced by Stage Presence Productions).

Rush Frazier (they/them) is an artist, activist, and Worcester native. Frazier has published twelve chapbooks, toured nationally, and has twice represented Worcester at national poetry slam competitions. They are a recent recipient of the Key to the City and a past president of the Worcester County Poetry Association. Rush is currently the president of 508Pride.

Youth Poet Laureate Amina Mohammed grew up in Worcester’s Main South neighborhood, the daughter of an immigrant family. Her parents worked long hours to provide for her and her siblings with considerable support from neighbors. Mohammad is the first Youth Poet Laureate in the state of Massachusetts.

Xaulanda Thorpe is a spoken word poet from Worcester, Massachusetts. She graduated from Boston University with a degree in biological anthropology in January 2020. During her time at BU, when she was not examining primate samples, she wrote short stories for Charcoal Magazine, a student-led publication. In 2021, Xaulanda’s poem was chosen for the African Burial Ground National Monument’s “Still I Rise” tribute to Maya Angelou.

Ashley Wonder has been writing for over ten years. She started out performing in black churches in Worcester. Then became a part of the Slam Community in 2014. Repping Worcester, her hometown, in Oakland 2015, Decatur, GA in 2016. She has had the opportunity to perform at the National Education Support Professional Conference (a part of the Massachusetts Teacher Association) in 2021 that had an audience of 2,000 people! She also had the honor to be a part of the “Still I Rise” Maya Angelou tribute Festival.