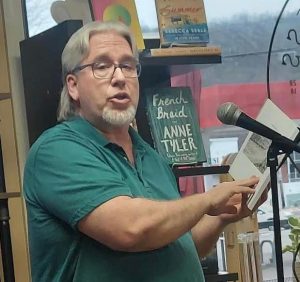 Open mike (5 minutes each) then the fabulous Robert Eugene Perry.
Fancy beverages and desserts available.
Sign up for the open mike at jfjr6969@gmail.com
Sponsored by D’Errico’s Markets
Join the fun!
Robert Eugene Perry is a native of Massachusetts.
His first novel Where the Journey Takes You, a spiritual allegory combining poetry and prose, was published in 2007. This was followed by four collections of poetry The Sacred Dance: Poetry to Nourish the Spirit in 2008, If Only I Were a Mystic, This Would All Come So Easy in 2011, Surrendering to the Path released by Human Error Publishing in 2020, and Earthsongs a 50 poem/50 sketch collaboration with artist Ferol Anne Smith also released by Human Error Publishing in March 2022.
Perry hosted a poetry group for disabled individuals at the former New England Dream Center in Worcester MA, and has emceed the monthly Open Mic at Booklovers’ Gourmet in Webster MA since May 2017.
Three poems were included in NatureCulture/ Human Error Publishing 2021 anthology Honoring Nature. Two of Perry’s poems were published in Poetica Magazine’s 2020 Mizmor anthology. He has had several poems published in Worcester Magazine, and his short story In The Company of Trees was published by WordPeace journal in 2021.
A metaphysical poet, he draws inspiration from nature endeavoring to reveal connections between our higher selves and the natural world. He is a devoted husband and father of two grown boys.