Who Is Donald Baker? 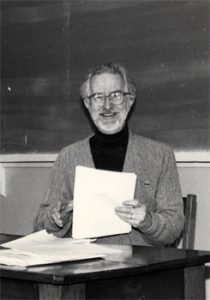 by: Rodger Martin (Excerpted from The Worcester Review XX)

As the twentieth century closes, the greater Worcester area has produced four poets who have received national renown during this period: Stanley Kunitz, Elizabeth Bishop, Charles Olson, and Frank O’Hara.

Often overlooked in this august company is another Worcester generated poet formed in the crucible of World War II, Donald Baker.  Since that war, Baker has published six volumes of poetry, been a Pulitzer Prize nominee, won a Pushcart Prize,  a National Endowment for the Arts Writing Fellowship, become the Milligan Professor of English and Poet in Residence at Wabash College in Indiana (where he also was awarded the McLain-McTurnan Award for Distinguished Teaching), and directed The New Writers Award program of the Great Lakes Colleges Association.  His poems have appeared in  The Atlantic Monthly, The Nation, Poetry, The Southern Poetry Review, Indiana Review, Saturday Review, The Beloit Poetry Journal, Prairie Schooner, Bitterroot, Tar River Poetry, New Letters, and many others.  Perhaps because much of his recognition comes from the Midwest, Worcester has been late to note his presence.  Editors at The Worcester Review noticed the quality of his work in 1992 when we published his first poem in the journal.  Since then, he has been a regular contributor to the journal.  In 1993 Stephen Tapscott chose his work as the winner of the Worcester County Poetry Association’s annual contest.  When he read at the Public Library for the WCPA annual meeting (also in 1993), those of us there recognized we had found another powerful Worcester voice.

In the pages that follow, three critics examine Baker’s poetry and its impact:  Bert Stern, “‘Barnacled Hope’: Homage to Donald Baker,” writes an essay about the lyric poet and the individual stand against the storms of life; Roger Mitchell’s  “ ‘People Have Turned This Corner and Disappeared,’: Some Thoughts on the Poetry of Donald W. Baker” muses about that fine line between “consequence and inconsequence” a poet must navigate to rise above these crises; and finally William Trowbridge deals directly with the impact of World War II in “Delinquent Laurels: In Praise of Donald Baker’s War Poems.”

How did Worcester come to be as Baker says, “The nearest I come to a ‘home town’”?[1]  The Great Depression hit his family as hard as any.  They moved to 630 Pleasant Street from Springfield in 1930 when Baker was seven, and by the time Baker completed his studies at Classical High School, his family had also lived on Lovell Street (270), Reed Street (14), June Street (190) and Courtland Street.  The stability of the public school system provided for Baker that sense of place one could call home.  In biographical statements for three of his books the first sentence of each pays homage to that schooling not only directly but also by equating it with Ivy League and flight training saying he was “educated by the Worcester public schools, Brown University and the Army Air Corps.”[2]  In his letters for this essay, Baker refers often to his schooling, particularly at Classical High School where he played first the violin poorly and then switched to the viola.  There he refers to himself as “the least effective member” member of the debate team, but found the love of poetry trying to “memorize more Wordsworth than any other member of Perry Howe’s English class.”[3]

There he also discovered Edward Arlington Robinson and Robinson’s impact on his poetics remains to this day:

“… those wonderful lines from Robinson, ‘What to him are Plato and the swing of Pleiades.’  Those have stuck in my poetic heart, the rhythm, of course, and the alliteration, but chiefly I think that totally fresh and surprising (and perfectly apt)      word ‘swing.’  The more I think about it the more I come to believe that the most  important achievement of the great poets is their discovery of the unexpected but   absolutely right word– its connotations, its sound, its rhythm, and its relation to the other words of the line.  It’s only a slight exaggeration to say that in almost  every line of Emily Dickinson you’ll find that surprising and revelatory word.  The frost ‘beheads’ the flower; the ‘blonde’ assassin, and so on.”[4]

Baker believes his poems about poetry may be the best statements of his poetics; therefore, we conclude with “Essential Questions” in its entirety and two excerpts from poems Baker suggests speak his sense of poetics far better than he:[5]

Vic Sammartino drives by
on his way to work.
He waves.
His busy smile expresses superiority and disdain,
because he thinks I am doing nothing.
He reminds me of the chairman of my department,
who prefers publishing scholars.
He’d better be careful.
Look what happened when they called Hitler
a lazy slob.

Mike Donovon’s daughter walks by,
off to the municipal pool,
in what appears to be a bikini.
She doesn’t wave.
No doubt her illiterate father
has poisoned her mind against poets.
She reminds me of high school summers,
girls named “Priscilla” and “Leona,”
who float on my mind’s eye
like rubber dolls in a bathtub.

Perhaps I should have been Gaius Valerius Catullus,
lounging at poolside,
composing a poem for Patty Donovon,
“voluptuous virgin,” phrases like that.
In Latin.

It’s no good.
If my wife ever had it translated,
she’d kill me.

Bradford Dunbar goes by, the corporate lawyer,
jogging.
He pretends to look at his watch,
then runs as hard as he can to intimidate me.
He thinks I am a failure
and out of shape.
OK, Dunbar, I know you saw me.
Lickspittle capitalist lackey!
He sprints to catch up with Donovon’s daughter,
who blows him a kiss
as he passes.
They don’t fool me.
He’s not her uncle.

Maybe I should have been Pablo Neruda,
hiding out in the Rockies,
writing a political poem,
“Letters from the extreme left,”
that would sweep the country.
I see Reagan, Haig, and Bradford Dunbar,
in Adidas and jogging shorts,
fleeing to Argentina.
They are arrested by the Cuban police.
Poets wreck all the nuclear energy plants,
and I win the Nobel Prize.

So that’s that.
What more can one do in a morning?
I get up from my notes,
go into my study,
and sit down at my typewriter.
It needs a new ribbon.
Well, it always takes a few days
to think through and polish a poem.
It’s twenty after eleven.
Let’s call it noon.
Let’s mix a martini,
and contemplate politics, love,
and the essential questions.

One of them said, A poet has no
information.  It sounded right. . . .
Sometimes at such parties I go out,
into another year, where the moon
is painting the house next door

. . . if I could,
I’d trade eggs for milk, walk only
that sandy path behind the house
where berries grew.  I’d read it all
into pages we’d choose together,
you, me, Grandpa, and that boy we’ll
never become, hot afternoon,
flood tide in the river, a book . . .