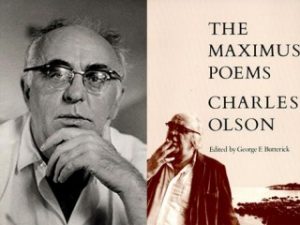 Charles Olson and his major work.

That’s all. I said. I promise to witness.
Charles Olson, Interview, 1970

To build out of sound the walls of the city
And display in one flower the wunderworld so that
By such means the unique stand forth
Clear itself shall be made known.
Charles Olson, Unpublished Fragment

Excerpt from The Charles Olson Sympsium:

Charles Olson’s inventiveness as a poet and scholar, as well as his engagement in community and national politics, have rendered him an American poet who continues to be an originating influence in our times.
Please join us as we mark the centenary with a challenging few days of poetics, friendship, and exploration.

We welcome the participation of poets, presenters, scholars and participants. Contact the WCPA or Olson Centenary Chair Mark Wagner at markgwagner@charter.net for additional information.

Charles Olson was born in Worcester, December 27, 1910, the son of working-class parents, a Swedish immigrant father and an Irish Catholic mother. They lived on Mitchell Street, moving in 1912 to 6 Norman Avenue. In 1914 his family settled in a third-floor apartment at 4 Norman Avenue, where he was raised. Throughout his youth and into his years at Classical High School Olson struggled to overcome his consciousness of his size and height. He went to Wesleyan College in 1928.

Olson has strong association with two places other than Worcester: Black Mountain College, North Carolina, where in the 1950s Olson was a teacher, rector, advancing alternative ways of thought and verse; and Gloucester, Massachusetts, a north shore fishing community where he spent his childhood summers and a place that would provide the major background for his epic work, The Maximus Poems, which are rich in myth, full of geography, history, architecture, and personal reflections. Though his poetry may not be focused heavily on Worcester, in 1965 at a public reading in Berkeley, California, after reading a poem titled “An Ode on Nativity,” a poem set in Worcester, Olson blurted out, “Gee, I’m moved. Wow, I never write about Gloucester like this. Do you think? I’ve been wrong all this time… My subject is Worcester.” Though these words may have been spoken in jest, some of Olson’s finest moments are Worcester ones. Three stories about his boyhood in Worcester are “Stocking Cap,” “Mr. Meyer” and “The Post Office,” each a loving tribute to a father who took his young son berrying in the summer, gathering walnuts and wild grapes in the fall, and fishing through the ice on Worcester’s lakes in the winter. In “The Post Office,” Olson describes his father’s mail route in Worcester:

It stretched along the lake which bounds the city on the east.
Originally the route ran on both sides of the lake south from the
bridge which carried the road to Boston. The bridge alone, and the
other wooded side (where nothing much was but the city’s amusement
park and some summer camps) were enough to make the route what
my father would like. Just to cross the bridge a winter morning…
or to be a part of the boating around in the summer and the fall,
gave his workday a freedom…

Before Olson left Worcester in 1928 to attend Wesleyan, as Classical High School’s star speaker he had won a summer-long trip to Europe, top prize in a national oratory contest. He received a BA at Wesleyan and stayed on to earn an MA in 1933, writing his thesis on Herman Melville. Olson returned to Worcester to teach at Clark University. He was a favorite among the freshmen students he taught and proctored. He received two Guggenheim fellowships and a grant from the Gren Foundation to study Mayan hieroglyphics.

During WWII, Olson worked in the Office of War Information, then in Roosevelt’s 1944 re-election campaign. Finding no place for an artist in such pursuits, Olson left politics and began writing poetry seriously in the period during which he served as informal secretary to Ezra Pound at St. Elizabeth’s Hospital in Washington, DC. In 1950 he stepped out of the footsteps of Pound and began the development of post-modern free-verse with Robert Creeley.

In 1957, Olson retreated to Gloucester to concentrate on his own poetry, emerging occasionally, the leader of anew poetic counterculture. He taught briefly in Buffalo and at the University of Connecticut, Storrs. He died in 1970 at the New York Hospital and is buried in Beechwood Cemetery, West Gloucester. Charles Olson was an extremely influential poet. His stature did not lie merely in his physical size but in the mythic dimension of his work.